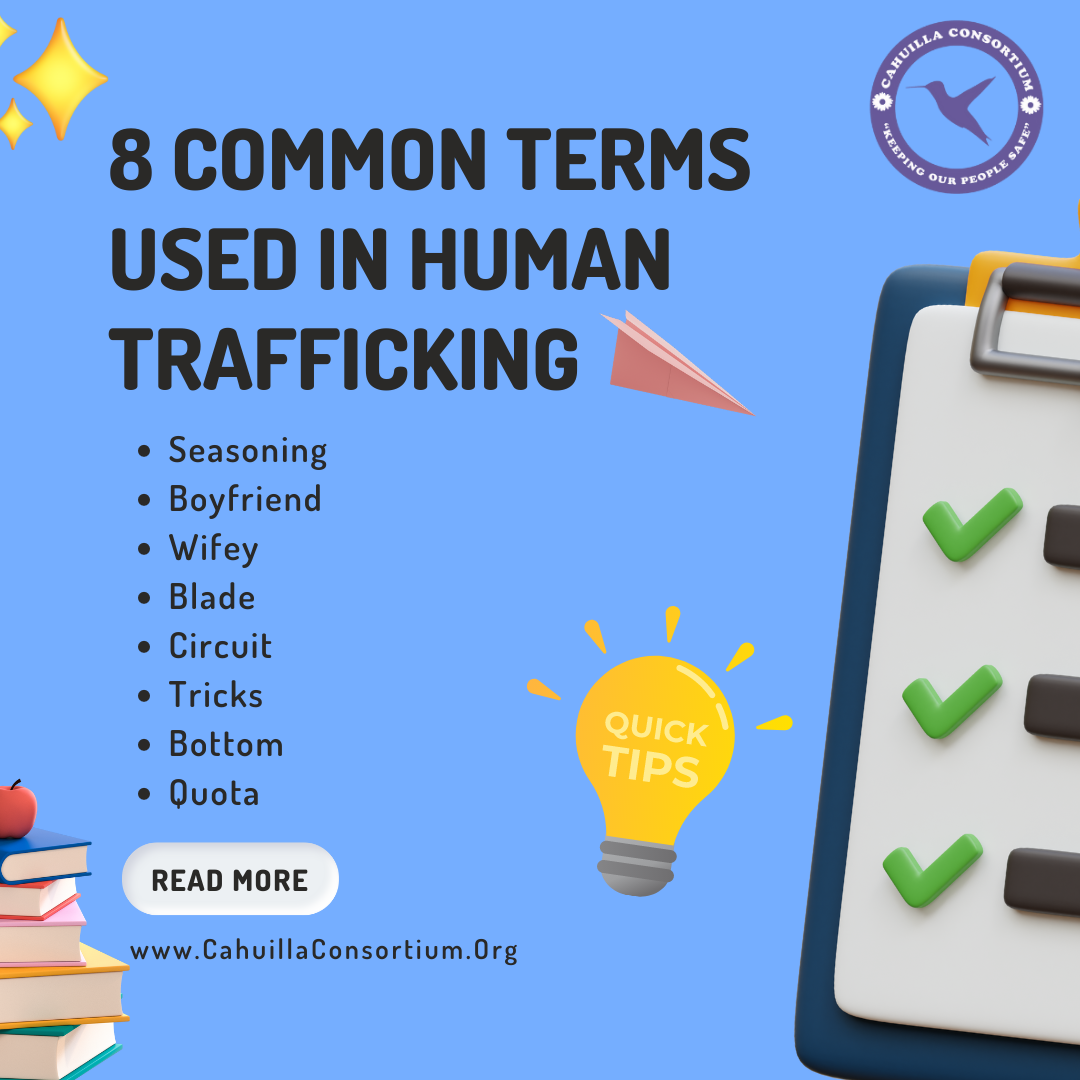 If you are a regular follower of the Cahuilla Consortium, you are probably aware that January is Human Trafficking Awareness Month. However, many people maybe unfamiliar with common terms utilized by traffickers and survivors/current victims of human trafficking. Being able to identify these terms is key to helping law enforcement identify human trafficking within the community. As a reminder, the term “human trafficking” itself is commonly referred to as the unlawful use of force, fraud, or coercion to obtain labor or commercial sex acts (dhs.gov). Therefore, the terms below will refer to either sex and labor trafficking or both.

Seasoning: The process of breaking down the resistance of a trafficking victim. This is often done through psychological manipulation, isolation, and/or intimidation. Seasoning can be used in both sex and human trafficking.

Boyfriend: Often, a victim of sex trafficking may refer to their trafficker as their “boyfriend” or “daddy” rather than utilizing their real name or relationship. It is important to note, many victims do often believe they are in some form of romantic relationship with their trafficker. Generally, this person is commonly referred to as a “pimp” by law enforcement or outside individuals.

Wifey: Another victim of trafficking who shares the same trafficker.

Blade: An area of a city which is commonly known for the selling of commercial sex work. This area is generally surrounding hotels/motels or is a specific stretch of street.

Circuit: Specific routes between cities where sex trafficking victims are moved between (usually in quick succession). Often, traffickers move victims between cities frequently to avoid detection from law enforcement officials. In Southern California, a common circuit is between San Diego and Las Vegas.

Tricks: A person who is purchasing sex from a victim of sex trafficking.

Bottom: Sometimes referred to as a “Bottom Bi*#h”, this term refers to a victim of sex trafficking who is trusted by their trafficker. Generally, this person acts as the right hand to a trafficker supervising the other victims and assisting in the recruitment and trafficking process. This person is often the person who has been with the trafficker the longest. Research suggests Bottom’s will often take the fall for their trafficker if they are caught.

Quota: The amount of money that a victim must make via prostitution or labor trafficking prior to being allowed “home” with the trafficker.

Now, we know that some of these definitions are intense to say the least. But, as previously mentioned, being informed is the best way for us to help prevent trafficking as a community! However, ensure to NEVER put yourself in a dangerous situation. If you do suspect human trafficking contact your local authorities and do not intervene. Learn more common terms at: https://sharedhope.org/the-problem/trafficking-terms/